Welcome to the West Wycombe Village Project Blog written by a National Trust volunteer and supported by the National Trust. If it's your first visit, find out more about the project in our about section.

My father in-law lives in Bledlow Ridge so he drives through West Wycombe Village often if not daily. He has an interest in historical houses and how to maintain them because of his own home which needs a lot of love and attention. Since writing this blog I have become his go-to person for queries about paint and other building materials. It was his curiosity which inspired the following conversation with Mark Wells.

The indomitable spirit of National Trust Project Manager Mark Wells comes across when he describes with passion the economic and environmental value of different building materials used in this refurbishment.

Here we begin with limewash, a traditional paint finish:


NV: What paints are used outside on the walls and why does it look cracked in some places?
MW: What you see on some buildings is vinyl paint applied in the past.  It is effectively a plastic dissolved in a solvent with paint pigments. Vinyl paint has been used extensively since the 1940’s and provides a rain barrier which can be great on modern buildings, but it's not usually practical on historic buildings that are built with lime mortar not cement. This is because they absorb moisture from the air and need to breathe it out again; vinyl paint prevents this.  We have over recent years carefully removed the vinyl paint from most of our buildings in the village.

NV: These historic buildings of West Wycombe Village breathe? How do they breathe and how does vinyl paint suffocate them?
MW: Absolutely: traditional buildings constructed with lime mortar breathe. The movement of moisture in and out of buildings should be a two-way process. They absorb moisture in damp conditions, and breathe it out again when the conditions change.  But a building constructed with cement mortar is different from those made of lime mortar. Buildings constructed using traditional techniques with lime mortar and natural materials can breathe, bend and flex. It’s one of the reasons why the buildings can withstand the heavy road traffic. Modern cement mortars are not as flexible, nor as open and porous to moisture.
Water should be able to travel through the walls and escape back out again. There's a fine balance or equilibrium in a good healthy building. If it’s wet outside then moisture is absorbed, and when it's dry outside then the moisture can evaporate. By applying vinyl paint you just stop the whole thing dead.

NV: Aside from rain where does the moisture come from and what happens to the water if it can’t escape to the other side?
MW: There's a lot of moisture generated in any house, for example: from your bath, shower, the washing-up and don’t forget the kettle. Actually the biggest source of moisture in your house is you! As you're constantly breathing out water vapour.
The moisture inside will still be absorbed by into the fabric of the building, but there it will stay - the moisture is trapped and cannot evaporate to the outside. That's one reason you may start getting damp patches on your walls – the vinyl paint can trap moisture.

NV: So why didn't we always just use limewash?
MW: Hindsight is a wonderful thing. We have this knowledge now, we know how things work and are better educated about vinyl paint which in the past was seen as a technological advance, perhaps a cure. It's not a case of blame it's a case of mistakes being made, understanding the problems and putting them right.
A great example of such mistakes with building materials is asbestos. Back in the day it was a miracle material, the answer to a lot of problems. It's a great insulator, completely fire proof and doesn't conduct electricity.  However, we now know that is a health hazard, and spend a great deal of time and money removing it when it is found in our properties.

NV: So could we go back to lime mortar instead of cement?
MW: There are many advantages to using lime mortar, but it's unlikely to replace cement in modern construction. Building with lime is slower than with cement, and that means higher costs.  Developers are unlikely to use it widely on a cost basis.
Building with lime mortar is not really more labour intensive but the drying time is longer. (Pointing to a builder working on the roof top over Crown Court) That guy up there is rebuilding the chimney at the moment using lime mortar. We have however added a small amount of cement, because it is very exposed up there and it needs a little extra strength. Even with the added cement, which will dry more quickly, it’ll still take a lot longer to fully cure than a pure cement mortar.
If you were to build a modern brick house it might take 3 weeks to build all the walls up to roof level using cement mortar. If you were to do that in lime mortar, then you would probably be talking minimum 6 to 10 weeks, so it's much slower and effectively that translates into more money.

NV: So if you’ve got an old lime mortar home aren’t you limited by the range of colours in lime wash?
MW: The colour of limewash is not usually not as strong as you would find with modern paints. Limewash is however more natural looking so arguably more attractive. Historically they were tinted with natural substances – such as ochre and even beetroot.  It’s basically crushed lime suspended in a liquid and then applied to the wall. It's what you'd call a homogenous material meaning it’s the same material as the building. So the ‘skin’  is also entirely breathable to let moisture in and out.

NV: It sounds perfect but there must be limitations. How long does limewash last?
MW: Limewash is seen as a sacrificial layer of the building which eventually wears off.  How long it lasts depends on various conditions such as location and exposure to the elements. Here in West Wycombe along the A40 because of the traffic and the splashes, the paint will wash off a lot quicker than on a small sheltered cottage away from the road. We would hope down here it would last about 4 years before they need redecorating.  This is one of the costs of preserving the natural fabric and history of historic buildings. Limewash is also worth using because it avoids harming the environment. Many modern paints are becoming water-based as people become more conscious of the environment and this is helpful. But it’s important to remember that all of this stuff, all building materials works their way into the environment some way, somehow.

Posted by Nina Villaroman at 14:00 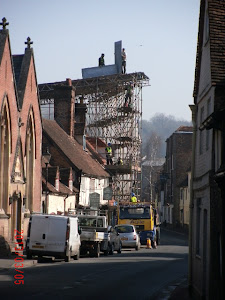